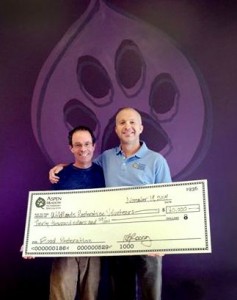 As a member of 1% for the Planet, Aspen Meadow Veterinary Specialists (AMVS) commits to donating a percentage of annual net revenues to a selected group of non-profits. Dr. Matthew Rooney, owner of AMVS, has been committed to supporting the sustainability of Colorado lands, so Wildlands Restoration Volunteers (WRV) was a natural choice. AMVS has been an avid supporter of WRV for the past few years, not only through monetary donations, but also as regular volunteers on projects throughout Boulder County.

Following the devastation of the Colroado floods in September 2013, AMVS reached out to WRV to offer help in restoring areas in Boulder County affected by the Colorado floods. AMVS pledged $30,000 to help with the costs associated with completing 5 post-flood restoration projects, including the Lyons Flood Restoration. the Anemone Hill Trail Rehab, and Coal Creek Flood restoration. According to Ed Self, founder of WRV, "WRV was able to accomplish a huge amount of post-flood restoration with this help." AMVS looks forward to continuing a relationship with WRV as these lands show a need for additional restoration efforts.