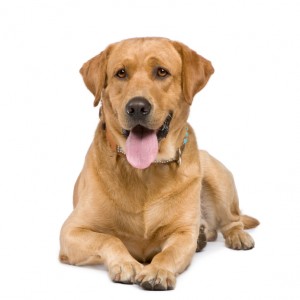 It is a warm, sunny summer day. You are hiking with your long time, furry friend, Duke, a 9 year old Labrador Retriever. He has been your hiking buddy for years, but recently his breathing has seemed hoarse and loud. Usually, Duke easily beats you up the trail, but now Duke is panting as he tries to keep up with you. What could be causing Duke’s difficulty breathing?

Laryngeal paralysis is a progressive, degenerative disease that causes the larynx, also known as the “voice box,” to lose its function. The main purpose of the larynx is two fold: to open while letting air in, as well as close to keep food out of the trachea. Laryngeal paralysis is more common in older, large breed dogs and rarely occurs in cats. Labrador Retrievers are a common breed to become affected, however, depending on the cause, laryngeal paralysis can occur in any breed. There are a number of causes for this disease. Some dogs may be born with a nerve disorder, predisposing them to laryngeal paralysis, while other causes can include trauma, tumors in the neck (thyroid cancer), chest masses, endocrine diseases (like hypothyroidism), or other acquired diseases. Despite all of these possibilities, more commonly the cause is unknown, which is what we call idiopathic.

Clinical signs start as progressively loud and harsh breathing due to turbulent airflow on inhalation. This occurs because the larynx is paralyzed and no longer retracts open to allow normal air flow. Instead, air is forced to squeeze through a very narrow opening. To us, the feeling is equivalent to inhaling through a straw. Imagine doing that as you run up and down a mountain! Other signs include a bark change, decrease in activity level, or exercise intolerance. Signs are worse in the heat or in stressful situations. This can lead to emergency breathing difficulties, cyanosis (blue gums and tongue), coughing, vomiting, restlessness, and severe anxiety.

So, what happened with Duke?

Luckily, his owner realized he was in trouble and took him straight to an emergency animal hospital. He was brought directly into the treatment area, provided oxygen, and given an intravenous sedative to calm him down. Once calm, he was heavily sedated and a laryngeal exam was performed. Both sides of Duke’s larynx were showing paralysis and were not opening up like they should. He was intubated in order to control his airway. He was immediately started on supportive care, as well, as his temperature was high. Having an elevated temperature can be another common finding and is consistent with a dog exhibiting signs of heat stroke. It is due to their inability to cool themselves off by panting.

Now that Duke is stable, what do we do next?

In dogs like Duke, surgery is recommended. This is called an arytenoid lateralization procedure, also known as a “tie back.” This procedure involves permanently tying back one side of the larynx in order to allow Duke to breathe more easily. The prognosis after surgery is typically good, given that there is no underlying disease.

Laryngeal paralysis cannot be prevented. However, early detection or emergency treatment can prevent detrimental events. If you notice any of the clinical signs above and your pet fits the signalment for commonly affected dogs, talk to your family veterinarian for more information on preventative measures. I encourage all owners to have their pets examined to talk about these options ahead of time. This will help prevent a stressful situation for both you and your pet.