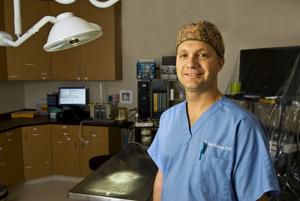 Of all the “green” features at Aspen Meadow Veterinary Specialists in Longmont, Colo-the energy efficient lighting, the recycled building materials, the on-site composting-which one gets the most initial attention from clients?

They have a dual flush design: Push one lever for a regular flush of solid waste, push the other for a low flush for liquid waste. Common in Europe, such water-conserving toilets are rare in the U.S.

“That one takes some explaining,” says clinic owner Matt Rooney, DVM, MS, Dipl. ACVS. “Americans are very inquisitive, and we found out that at first a number of people were pushing them both. We had to put up little signs so people would know what to do.”

Educating people about sustainable technology, not just toilets, is part of the plan at Dr. Rooney’s hospital. In turning a car dealership into an 8,4000 square-foot clinic, Rooney aimed to be as environmentally friendly as possible. In fact, the veterinarian is working to obtain Leadership in Energy and Environmental design certification for the clinic.

LEED certification, developed by the non-profit U.S. Green Building Council, is awarded only to those buildings that meet stringent standards for energy efficiency and resource use.

“Combining a green facility with a medical facility, and a veterinary facility at that, did at times seem daunting, even overwhelming,” says Rooney, 41. “But it was very important to me. I’ve always known that if I ever had a clinic, I wanted it to be green.”

Years in the Making

Rooney’s environmental interest has deep roots. When he was growing up on 40 wooded acres in upstate New York, during his summer his mother “would put a backpack on me with a lunch, and I'd spend the whole day outside climbing trees, looking for frogs, snakes and lizards. I always felt connected to the outdoors."

Years later, he postponed law school to backpack through Africa and spend time volunteering. He soon realized that veterinary medicine was a much better fit. A graduate of Colorado State University’s veterinary school, he worked extensively in wildlife conservation, studying mountain gorillas in Africa and parrots in Central America before settling in Colorado and specializing in surgery.

Even as he started a practice in another facility, he planned for the day he could build one. Rooney kept notes and diagrams of exam rooms and clinic features he liked, and consulted often with friends and colleagues.

When he was ready to build, he decided that adapting a building to green technology would use fewer resources than starting from the ground up. He interviewed more than 20 contractors and almost as many architects, trying to find someone committed to sustainable building.  But professionals who’d worked on green projects had little or no experience with veterinary facilities and their special needs.

Air circulation and air quality, for instance, were big concerns, Rooney says. A sick dog can quickly produce a stench in an observation room. A challenge for green facilities is to have a system that can efficiently circulate air while using a minimum amount of energy, especially at an affordable cost. Rooney’s clinic ended up with a computer-controlled ventilation system that uses carbon dioxide sensors and exceeds industry standards in fresh-air delivery.

“Matt was always concerned with incorporating as many environmentally friendly materials, systems, equipment and processes as we could in the project. In some cases he was willing to spend quite a bit more money just to do the right thing," says Chanie Wood, a partner with Pallavicini LLC of Denver, who served as the project manager. "He was not willing to give up on something until we had researched it and talked with multiple experts."

Only 10 animal care projects are LEED-certified in the U.S., says Ashley Katz of the Green Building Council. Nearly 50, including Rooney’s, are in the certification process, indicating a trend, she says.

From Flooring to Bike Racks

Rooney says that beyond the right thing to do, environmentally conscious projects can add to the bottom line by saving money on things such as heating, cooling and water. He spent more than $1.5 million on the retrofit and says an early analysis shows that even though the facility is three times the size his previous one, his electrical and water bills have only doubled.

Aspen Meadow uses recycled concrete, carpet, floors and countertops; low-emitting paints, carpets and sealants; and energy-efficient lighting, heating and air-conditioning systems. The landscape was xeriscaped using native plants to avoid wasteful watering. Outside lighting doesn’t intrude into wildlife habitats. Space was made for bike racks, showers and lockers to encourage employees to bicycle to work, and the site was chosen in part for its proximity to local bus lines.

Many of the modifications could be adopted easily by any home or business.  For instance, all water faucets are low flow, and washers and dryers are high-efficiency. (Care is taken not to over-dry fabrics.) Lights are on motion sensors so they’re used only when needed. Composting, paper conservation and recycling have cut by 70 percent the amount of trash that the practice sends to the landfill.

Rooney has had to revert to some seemingly old-fashioned methods. For example, he went back to cloth surgical wraps instead of paper wraps. The decision came after he determined that newer, higher-thread cloth wraps could keep instruments sufficiently sterile. Animal care, in fact, is just about the only reason Rooney would choose not to use the greener option, he says.

“At the end of the day we are here to take care of pets,” Rooney says. “the fact that we can do it in a green manner is great, but patient care comes first.”