The proper use of antibiotics and the emergence of antibiotic resistance have received much attention in recent years. At one point or another, all practitioners have experienced the difficulty of treating a patient with a multi-drug resistant (MDR) organism, defined as having acquired non-susceptibility to at least one agent in three or more antimicrobial categories, and this problem is likely to become more prevalent in the future. Although all types of infectious agents can develop resistance, bacterial populations are the most problematic. To help put the issue in perspective one can consider the timeframe for the so-called “antibiotic age,” or the period during which antibiotics have been used extensively to treat infectious disease. Although the existence of these molecules likely predates modern man, the beginning of the antibiotic age can be traced to roughly 1928, when Alexander Fleming identified and recognized the antimicrobial actions of penicillin. Less than a century has elapsed since that time, which is a small fraction of the overall time period of human existence. The fact that we are already faced with significant antibiotic resistance is sobering for the future of our ability to treat infectious disease.

As veterinarians, our first responsibility is to our patients and naturally we want to cure harmful infections. However, we must not lose sight of the important role our profession plays in public health. The evolution of antibiotic resistance will not only complicate treatment of our animal patients, but many of the emerging MDR organisms may also pose a threat to the human population. This has been recognized for some time in food animals due to the widespread use of antibiotics for prophylaxis and as growth promoters. There are many socioeconomic and public health controversies that surround this issue, but the use of antibiotics in this fashion has been shown to contribute to antibiotic resistance (Aidara-Kane 2012, Lauderdale and others 2007). One notable example is the use of avoparcin as a growth promoter in pigs and poultry. This antibiotic is in the glycopeptide family, and its use led to an increase in the prevalence of vancomycin-resistant enterococci (VRE). After banning its use in Thailand in 2000, the incidence of VRE significantly decreased (Lauderdale and others 2007).

More recently, concern has been raised regarding the role of companion animals in the emergence of antibiotic resistance and the potential threat to public health. The overall global population of pets is steadily increasing, and owners are pursuing more advanced care. Both of these factors will lead to increased antibiotic usage and a greater chance for the development of antibiotic resistance. In contrast to food animals, pets and their owners spend most of their time together in close contact, increasing the risk of bacterial transmission. This is a potential threat to both humans and their pets, as either may be a source of infectious MDR bacteria. A recent study showed that dogs and their owners from the same household shared the same strain of fecal E. coli, documenting that transmission does occur (Johnson and Clabots, 2006). Another study detected the MDR E. coli strain O25b:H4-ST131 in the feces of dogs, which is the same strain causing a variety of severe human infections worldwide (Platell and others 2010). Aside from E. coli, other zoonotic bacteria of concern include methicillin-resistant Staphylococcus aureus (MRSA) (Weese and van Duijkeren 2010, Wieler and others 2011), methicillin-resistant Staphylococcus pseudointermedius (MRSP) (Weese and van Duijkeren 2010, Wieler and others 2011), and Enterococci (E. faecalis, E. faecium) (Hammerum, 2012).

To serve both our patients and the greater public health, it is crucial that veterinarians employ responsible use of antibiotics, as well as adopt practices that limit the spread of infectious agents. The American Veterinary Medical Association has developed a set of guidelines for judicious antibiotic use that all veterinarians should follow (AVMA, 2013) which will minimize the development of antibiotic resistance over time. There are several important points, but it should be emphasized that culture and susceptibility are of paramount importance. These document that an infection actually exists, and allow one to choose the most appropriate antibiotic. Although a culture may not be possible in every case due to patient condition or financial limitations, it should always be considered as the standard of care prior to initiating therapy. This should almost always be the case when a urinary tract infection is suspected, as performing cystocentesis to obtain a sterile urine sample for culture is a safe and straightforward procedure. Too often this step is skipped in favor of empirical antibiotic therapy, a practice that is unfortunately all too common in human medicine as well.

Susceptibility results allow one to choose the most effective antibiotic, as well as one with a spectrum focused on the organism being treated. This will limit the use of broad-spectrum antibiotics, thereby reducing antibiotic resistance. Susceptibility is based on minimum inhibitory concentration (MIC), defined as the minimum concentration of antibiotic that inhibits visible growth of a bacterial isolate after overnight incubation. When an antibiotic is tested against an isolate in this manner, a MIC (observed) is recorded. The MIC(obs) is then compared to the MIC (breakpoint) of the antibiotic, which is unique for each antibiotic and determined by several factors. In general terms, if the MIC(obs) is less than the MIC(bp) the isolate is classified as susceptible to the antibiotic, and resistant if the MIC(obs) is greater than the MIC(bp). Interpretation can become more complicated with intermediate susceptibility, but this is beyond the scope of this discussion. Using MIC(bp) to guide antibiotic therapy is the current standard of care, but some bacteria in an infecting population may have mutations that result in resistance to the antibiotic at concentrations normally classified as effective. Higher doses are necessary to kill these mutants and prevent the emergence of MDR organisms, leading to the idea of mutant prevention concentration, or MPC. This is defined as the lowest antibiotic concentration required to restrict the emergence of first-step mutants within a susceptible bacterial population. The MPC is higher than the MIC (see Figure 1), and the range of antibiotic concentrations between the two is termed the mutant selection window (MSW). Antibiotics delivered at concentrations in the MSW may kill most of the bacteria in question but select for resistant isolates, allowing a new MDR population to grow. Ideally, an antibiotic should be chosen based on the MPC to limit the emergence of resistant bacterial populations. This is a strategy that is relatively new, but is gaining recognition as a potentially more effective way to use antibiotics. Specifically, MPCs are relevant to the use of fluoroquinolones and this has been the subject of recent studies of canine E. coli infections (Daniels and other 2013, Gebru and others 2012), discussed in more detail below. 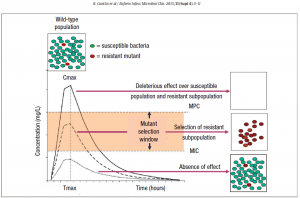 In addition to using culture and susceptibility to guide antibiotic therapy, it is important to use the appropriate dose, dose interval, and duration. This may seem to be an obvious recommendation, but deserves mention due to the fact that these parameters are moving targets and are always evolving. For example, when enrofloxacin was first approved the labeled dose interval was q12h. However, based on an expanded knowledge of the pharmacokinetics of this medication, it is now known that it is more effective when given on a q24h schedule. The duration of antibiotic therapy is also highly variable, depending on the type or location of infection as well as patient factors such as immunosuppression. One example is the treatment of urinary tract infections. The duration of therapy for pyelonephritis (~6-8 weeks) is much longer than what is required for an uncomplicated bacterial cystitis (~10-14 days), but a recent study (Westropp and others, 2012) suggests that there may be even more options. The authors found that a short course of enrofloxacin (20 mg/kg PO q24h x 3 days) was not inferior in treating uncomplicated canine bacterial cystitis compared to a more traditional course of Clavamox (13.75 mg/kg PO BID x 14 days). Interestingly, the 2014 Daniels study cited above showed that the enrofloxacin dose of 20 mg/kg PO resulted in a urinary antibiotic concentration that exceeded the MPC for canine E. coli isolates. There is still more research needed to further evaluate this shorter protocol and it may not be wise to use a fluoroquinolone as a first-line antibiotic, but this study demonstrates the emerging recognition of MPC in veterinary medicine as well as highlights the fact that we cannot be complacent with the status quo of antibiotic use. It is the responsibility of all practitioners to be aware of the most current recommendations for antibiotic use based on controlled studies.

In order to make better decisions about antibiotic use and to create strategies to limit antibiotic resistance, it is necessary to be aware of information regarding trends in the prevalence of infectious agents and antibiotic resistance. Several studies have been done in this area, with one example being a recent report by Hall et al (Hall and others, 2013). This examined the incidence of canine urinary tract pathogens and their antibiotic susceptibilities between 1999 and 2009. The data show that as in the past E. coli is the most common cause of canine urinary tract infections (UTI), followed by E. faecalis and Staph. intermedius. All three of these were listed earlier as infectious agents of public health concern. Impact factor analysis was used to demonstrate that the antibiotic resistance of E. faecalis increased over the 10-year time period, which also may have public health implications. Enrofloxacin and cephalexin were found to have decreased efficacy, which is cause for concern given the frequency with which these medications are used in veterinary and human medicine. Fluoroquinolone resistance is a serious problem in both human and veterinary medicine that has been previously identified: a veterinary study showed that up to 40% of E. coli urinary isolates displayed resistance of fluoroquinolones (Boothe and others 2006), while human studies revealed that up to 10% of all bacterial isolates were resistant to ciprofloxacin and levofloxacin (Zhanel and others 2005). The study by Hall et al. shows that this disturbing trend is continuing. Fluoroquinolones are often used as first-line or even empirical antibiotics, when they should be reserved for more resistant or serious infections. Considering all the evidence, practitioners should limit the use of fluoroquinolones to those cases where they are necessary and indicated by culture.

Veterinarians should take note of report by Hall et al. as well as other studies like it, as they are important to the formulation of strategies to minimize the progression of antibiotic resistance in both veterinary and human medicine. The results also draw attention to the fact that the veterinary profession should regard antibiotic protocols as dynamic, and not become complacent in practices that have become comfortable and routine. We may not be able to stop the development of antibiotic resistance, but we should not be acting in a way to accelerate the process.

AIDARA-KANE, A. (2012) Containment of antimicrobial resistance due to use of antimicrobial agents in animals intended for food: WHO perspective. Revue scientifique et technique (International Office of Epizootics) 31, 277-287.

BOOTHE D.M., BOECKH A., SIMPSON R.B., DUBOSE K. Comparison of pharmacodynamic and pharmacokinetic indices of efficacy for 5 fluoroquinolones toward pathogens of dogs and cats (2006). Journal of Veterinary Internal Medicine 20, 1297-1306.

HAMMERUM A.M. (2012). Enterococci of animal origin and their significance for public health. Clinical Microbiology and Infection 18, 619-625.