Arthrocentesis is the aspiration of synovial fluid from a joint space for diagnostic evaluation. The technique is simple to perform for most peripheral appendicular joints in small animals and is associated with minimal morbidity. When combined with other diagnostic procedures, such as radiography, evaluation of a synovial fluid sample can assist in the diagnosis of joint disease, and an animal’s response to treatment.

Synovial fluid analysis should be included in the diagnostic evaluation of patients with single or multiple joint effusion, fever of unknown origin, generalized stiffness, or shifting limb lameness. The procedure is safe and simple and requires little time, and supplies are often inexpensive.

Initial diagnostic testing that should be considered before joint taps are done include a CBC, chemistry profile, urinalysis/ urine culture, and radiographs of affected and corresponding nonaffected joints. A coagulation panel can be submitted if hemarthrosis secondary to toxicity or inherited disease is suspected. Further studies, such as serologic testing for infectious agents (Borrelia, Ehrlichia, Rickettsia, and Toxoplasma species) and systemic testing for immune-mediated disease (such as antinuclear antibody or a urine protein–creatinine ratio), should also be considered when appropriate historical or clinical signs are present or after joint tap results have been evaluated. Blood cultures may also be considered to look for a systemic infectious cause of joint inflammation. 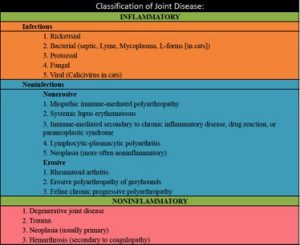 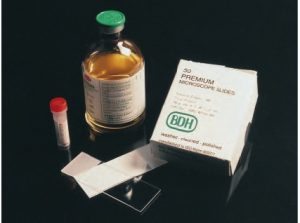 The animal should be restrained appropriately before the procedure. This may be achieved by sedation, a short general anesthetic or, at least, a local anesthetic (under the skin, not into the joint). The animal should lie comfortably in the appropriate position and the limb from which the joint fluid is to be obtained should not move during the procedure once the proper limb position is achieved. The arthrocentesis site should be clipped and prepared aseptically with a chlorhexidine or povidone-iodine preparation and alcohol. It is important to note that, depending on size of the respective animal and chosen joint, a yield of less than 1 ml joint fluid is common in non-effused joints.

SHOULDER
With the shoulder in a neutral position (neither flexed nor extended), palpate the acromion and introduce the needle perpendicular to the skin directly below the acromion. If the needle hits bone, gently ‘walk’ the needle either slightly proximally or distally until the joint capsule is penetrated.

METACARPOPHALANGEAL/ METATARSOPHALANGEAL JOINTS
Arthrocentesis of the metacarpo(tarso)phalangeal joints is extremely difficult if they are normal. However, placement of the needle on the dorsal aspect to the side of the digital extensor tendon, with the joint maximally flexed, will facilitate arthrocentesis of diseased joints. It is prudent to use a slightly smaller needle (21 gauge, 16 mm) in all patients.

HOCK
The talocrural joint space is most easily aspirated. Flex and extend the talocrural joint to identify the position of the joint. With the joint in a neutral position, insert the needle on the dorsolateral aspect, just medial to the palpable lateral malleolus of the fibula, in a plantaromedial direction. Applying digital pressure to the plantaromedial and plantarolateral aspects of the joint may help to displace synovial fluid into the dorsal joint pouches, making a positive arthrocentesis more likely. Alternatively, the plantarolateral joint space of the hock may be aspirated by placing the needle parallel to the calcaneus, just medial to the lateral malleolus. Arthrocentesis of the proximal and distal intertarsal joint spaces and the tarsometatarsal joint space is rarely required, but can be achieved by palpation of bony landmarks dorsally and dorsal needle placement.

Physiological normal joint fluid:
In a normal patient, the fluid is clear, colorless to slightly yellow and viscous. As mentioned previously, an amount of 0.01-1 ml may be obtained from a normal joint, depending on the patient’s size and the joint aspirated. Normal joint fluid should form a ropy strand of 2.5-5 cm when drawn from a glass slide. See image below 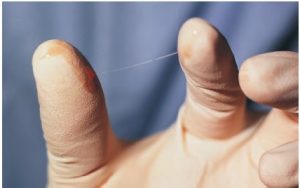 If blood contamination is present, the blood will not mix with the joint fluid, but rather form streaks, whereas blood from ongoing hemorrhage into the joint appears evenly distributed. The protein content of joint fluid should be less than 3g/dL and the pH varies between 7 and 7.8. The total nucleated cell count within joint fluid should be less than 3000 cells/mm3. Polymorphonuclear cells should represent less than 10% of the total cell population. Changes in color, volume, viscosity, cell count or biochemical parameters may represent pathological conditions, such as septic arthritis, immune-mediated arthropathies, neoplasia or others.
(See Table)

To establish whether septic arthritis is suspected, joint fluid should be cultured (submit in plain vials, on culture swabs or blood culture bottles). The use of blood culture media is recommended particularly in cases where slowly growing organisms are expected or empirical antibiotic therapy was performed prior to the joint tap. A negative blood culture does not completely rule out a septic arthritis.

To use blood culture bottles proceed as follows:

Summary:
Arthrocentesis is a simple diagnostic procedure that is associated with minimal morbidity. Synovial fluid assessment can be readily performed and the results rapidly interpreted in practice; It requires little expertise or equipment, and should be carried out whenever joint disease is suspected.