What are perineal hernias? 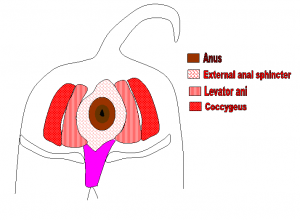 Who gets perineal hernias?

Prevalence in dogs is from 0.1% to 0.4% with 83-93% of those cases being intact older male dogs. Most commonly, it is seen in dogs ages 7-13 years. Breed predispositions include Pekingese, Boston Terriers, Corgis, Boxers, Poodles, Bouviers and Old Englsh Sheepdogs. Mixed breeds are also commonly affected. Short-tailed dogs may be over-represented due to weakness of the pelvic diaphragm.

Why do perineal hernias happen?

Androgens have been suggested to play a role due to the fact most of these patients are intact male dogs. In a retrospective study, dogs that were not castrated at the time of perineal hernia surgery had a 2.7 times greater risk of recurrence of hernia than those that were castrated. Other studies have shown that castration reduces the recurrence rate by 23-43%. One thought as to the reasoning behind this is that testicles in older dogs could secrete estrogen which could cause relaxion of the pelvic diaphgram. Tests evaluating the levels of testosterone and estradiol-17b however, have shown similar concentrations in intact and neutered male dogs. A second theory is related to androgen receptor number within the pelvic diaphragm. In one study the number of androgen receptors were lower in quantity and sensitivity in dogs with perineal hernias than in neutered and control intact dogs. The significance of this finding is not known.

There is also discussion about gender variations in the pelvic diaphgram region. Females have larger, wider and stronger levator ani muscles which have a longer attachment space and larger sacrotuberous ligaments. This means that the peritoneal cavity ends more cranially in females making them less prone to herniation.

Relaxin may also play a role in hernia development. The primary location of relaxin synthesis in the male dog is the prostate gland. Prostatic cysts or hernia pockets may have leakage of relaxin in the cranial aspect of the pelvic diaphragm which could result in weakening of muscles and ligaments in the area. Studies have also found an increased expression of relaxin receptors within the muscles of the pelvic diaphragm in dogs with perineal hernias. However, no actual difference in the relaxin concentrations have been noted between those groups.

Prostatic disease is also a likely contributor to these hernias. 25-59% of dogs with perineal hernias have prostatic disease. The most likely connection is that prostatic disease leads to straining which can then put increased tension on the pelvic diaphragm. If the prostate is enlarged it is recommended to neuter at the time of surgery.

Most common clinical signs include perineal swelling, unilateral or bilateral, straining to defecate and constipation. Stranguria can be seen in patients with retroflexion of their bladder into the hernia sac.

Diagnosis is based upon rectal examination. The most common findings are loss of a normal pelvic diaphragm, deviation of the rectum and fecal impaction in that region. Removal of fecal material may be needed to fully be able to palpate the region. Abdominal radiographs are important to assess prostatic size as well as bladder location and ensure there is not bladder retroflexion. If it is unclear a contrast cystogram can be performed to diagnose bladder location. Abdominal ultrasound can also be used to assess bladder location, as well as location of other peritoneal organs. The hernia sac can also be ultrasounded to assess for bladder or loops of bowel.

Medical treatment alone is only indicated if there is signficant disease that prevents anesthesia and surgery. Treatment consists of a combination of dietary management, stool softners and evacuation of feces as needed with warm water enemas. High fiber diets with a high moisture content will help to allow normal defecation. Conservative therapy is rarely successful longterm.

There are three main surgical options for treatment. Prior to surgery it can be helpful to pass a urinary catheter so that the urethra is readily indentifable. If the hernia is bilateral, repair of both sides under the same anesthetic episode is recommended. The surgical options include primary herniorrhaphy, muscle transposition or reconstruction with prosthetic implants. 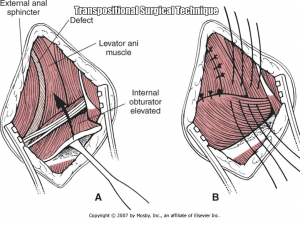 Implants include polypropylene mesh, porcine small intestinal submucosa, porcine dermal collagen and fasca lata. The overall healing rate is less studied for these techniques as they are used less frequently.

In addition to the hernia repair, there are some indications for a pexy procedure. If the bladder was retroflexed a cystopexy can be performed. The goal of the pexy is to prevent future retroflexion of the bladder. Colopexy can also be performed however this is not commonly done.

Overall complication rates for hernia repair are 29-61%. IOT complication rates have ranged from 20-46%. Recurrent rates with primary repair are 10-46% and with IOT are 0-33%. The most common surgical complications are seroma, infection, and incisional dehiscence. Post-operative complications associated with the hernia itself are tenesmus, dyschezia, fecal impaction, stranguria, hematochezia and urinary incontinence. In a recent study using IOT, recurrence occurred in 20.5% of dogs with a 1 year recurrence rate of 27.4%. Median time to recurrence was 28 days. The presence of post-operative tenesmus was identified as a significant risk factor for the development of recurrence.

Overall, dogs benefit greatly from surgery for repair of perineal hernias. Owners do need to be warned about the potential complications as well as the potential for recurrence, but quality of life without surgical treatment is not ideal. Please call us if we can be of any help with management of these issues.