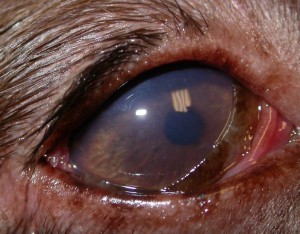 Acute traumatic brain injury (TBI) should be suspected in any patient that has suffered trauma especially when they have evidence of external head injury (epistaxis, oral hemorrhage, facial or skull fractures, aural hemorrhage, and facial wounds). When treating a patient with TBI, identification of life threatening extra-cranial injuries such as hemorrhage, penetrating thoracic or abdominal wounds, airway obstruction, and compromise of oxygen, ventilation or volume status should have first priority. Once life threatening extra-cranial factors have been addressed, intracranial priorities include maintenance of adequate cerebral perfusion pressure, adequate oxygen delivery to the brain and treatment of acute intracranial hypertension, as well as continued monitoring of neurologic status.

The injuries that results from head trauma can be separated into two categories: primary injury and secondary injury. Primary injury refers to damage caused as a direct result of the force of the trauma on the neurologic tissue and cannot be altered. The least severe primary brain injury is a concussion, characterized by a brief loss of consciousness and no underlying histopathologic lesions. Next, a more severe type of injury is a contusion which consists of parenchymal hemorrhage and edema. Contusions can occur in the brain directly under the site of impact or in the opposite hemisphere or both as a result of displacement of the brain within the skull. Laceration is the most severe primary brain injury and is characterized by physical disruption of the brain parenchyma. Secondary brain injury is an alteration of brain tissue triggered by the primary injury that leads to progressive cell injury and death. This cascade of events includes a massive release of excitatory neurotransmitters causing an influx of sodium and calcium into neurons, a depletion of ATP stores and ultimately, neuronal cell death.Inflammatory mediators perpetuate secondary brain injury by inducing nitric oxide production which has been associated with perpetuation of injury due to its vasodilatory effects and participation in free radical reactions which leads to disruption of the blood-brain barrier. Displacement of the CSF into the subarachnoid space leads to compression of vascular conduits reducing arterial inflow and venous outflow. Very small increases in intracranial volume results in marked increases in intracranial pressure. Brain hypoxemia and ischemia perpetuate the secondary effects of brain injury.

Treatment of TBI should begin with treatment of injuries to the cardiovascular system and respiratory system as hypotension and hypoxemia will have adverse effects on the long term outcome for the patient. Supporting mean arterial pressure with intravascular volume expansion may include crystalloid and/or colloid fluid therapy to maintain a systolic blood pressure of 90mmHg. Supplemental oxygen should be instituted to maintain a SP02 of at least 90% or a PaO2 of at least 60mmHG. The patients CO2 levels should be maintained at a normal level (<45mmHG). If PaO2 or PaCO2 cannot not be maintained, ventilator management should be considered. An initial data base should include PCV/TP, blood glucose, arterial blood gas, SPO2 and blood pressure, chest and abdominal radiographs and an abdominal ultrasound to evaluate other evidence of trauma. CT scan may be considered when the patient is stable. A Modified Glasglow Coma Scale (MGCS) should be performed to provide a baseline neurologic status and repeated twice daily to monitor for progress or decline.

Treatment goals include controlling ICP and maintaining CPP. Hyperosmotic agents such as Mannitol (0.5-1.5mg/kg over 20 minutes) and hypertonic saline (4-6ml/kg IV over 15 minutes-lower dose in cats) can be used to reduce cerebral edema. Mannitol can lead to severe volume depletion so it should be followed by crystalloids to maintain normal blood pressure. Hypertonic saline does not lead to volume depletion like Mannitol but is contraindicated in patients with hyponatremia. You can promote venous drainage by elevating the head 30 degrees without kinking the jugular vein. Blood should not be drawn from the jugular so as to avoid jugular compression. Seizures should be treated with diazepam or if cluster seizures are present, phenobarbital. Glucocorticoids have shown no benefit in human studies and may increase morbidity.

Generally the prognosis for mild head trauma is good. Patients with moderate to severe trauma, who show signs of improvement in the first 24-48 hours have a better prognosis than those who do not improve or decline. Those patients may have several weeks to months to make a full recovery and may have permanent residual neurologic deficits. 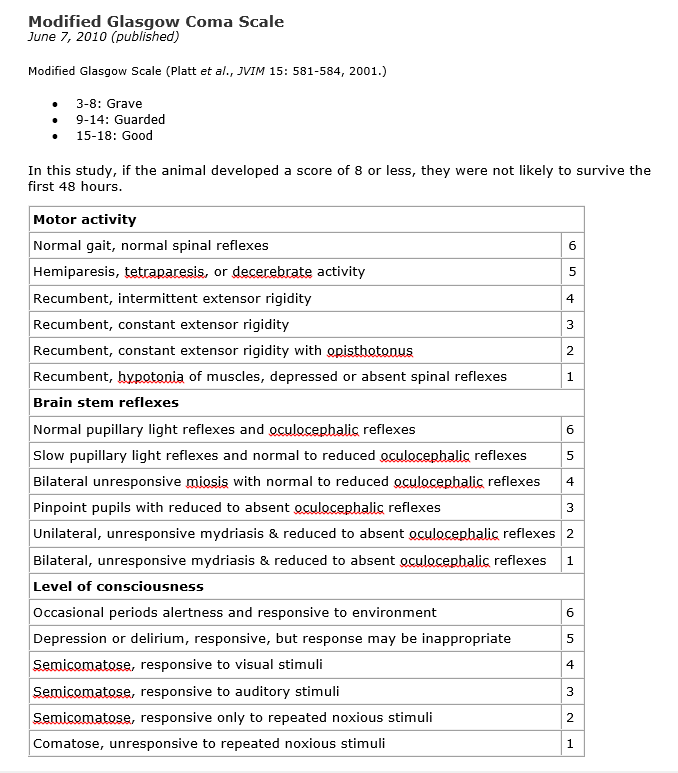